While discussing her autobiographical novel, Sinner, on a televised talk show, Virginia (Virge) Young is shot by an enraged Christian fundamentalist. As she slides into unconsciousness—and perhaps toward death—she slips between the paths of her life that have led to this moment: the events of the year she turned thirteen, the adult life in which she married, came out, and became a writer, and ahead into possible futures. The social turmoil of 1969-70 is the backdrop for the struggles of the girl against the strictures of the Southern Baptist church, her family, her own body, and the cultural norms of the era. As an adult—a lesbian and therefore a “backslider” according to her family—Sinner has finally brought Virge from that pivotal coming-of-age year into direct confrontation with the hypocrisy of the religious right in 2001.

Will she find reconciliation with her idea of God, her family, her past and her future? Will she lose her life, or will she discover a path to redemption and new life? 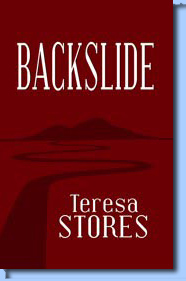 Backslide “illustrates in living color what it was like to grow up as a Southern Baptist in the ’60s, navigating the bumpy road from loneliness and sexual denial to self-assurance.” -the Advocate, October 21, 2008